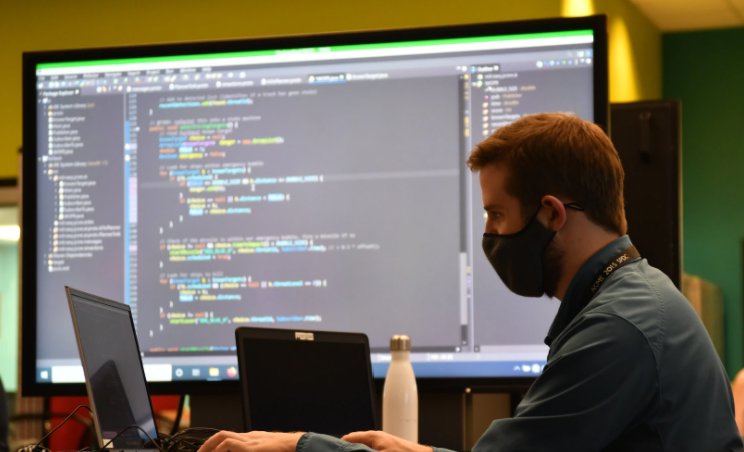 “A lot of people think of a hackathon as an event where one might break into a computer or network,” explained iLab Deputy Director Tamara Stuart. “But the iLab hackathons are events that bring people together to use a new tool or technology or to solve a problem in a way they may not have been aware of before. So they’re ‘hacking’ on problems.”

The “battle of the departments” challenged the seven teams to utilize their artificial intelligence (AI) expertise to design algorithms for directed energy, hypervelocity and air defense applications.

The wargaming scenarios played out in the Joint Cognitive Operational Research Environment (JCORE) – a medium-fidelity software tool capable of simulating fleet-level exercises. As a wargaming tool, JCORE aims to bridge the gap between tabletop wargaming and high-fidelity modeling and simulation to provide a repeatable, faster-than-real-time solution.

The event sponsor, the NSWCDD Center for Warfare Systems Innovation led by Dr. George Foster, created a different scenario for each day of the three-day event. The scenarios became progressively more difficult with each day and forced the participants to fend off more adversaries. But, as the enemies became smarter and more plentiful, the hackers were given additional combat systems to destroy them.

The teams used AI to design and train algorithms that would trigger their friendly ship to respond to adversarial actions in the scenario. For instance, if an enemy were to fire a missile, the hackers might have designed an algorithm that fires a friendly missile or laser weapon once the adversarial weapon reached a specified altitude.

After Day One of the hackathon, only one department – the Gun and Electric Weapon Systems department – had made it onto the leaderboard. But, with each hour of the event, the hackers from every department made incredible strides in designing effective algorithms that optimized points according to the event’s rubric.

Moments of silence, contemplation and mental computing preceded the vigorous clacking of keys on laptops and calculators. As algorithms were built and practiced, teams found solutions and watched their scenarios play out on the iLab’s big screens.

The competition stiffened considerably from day one to the event’s final hours, but it was ultimately the team representing the Integrated Combat Systems department that claimed victory – albeit by a 1.15 point margin.

“For me, personally, the hackathon was a nice introduction to new technologies,” said Brandon Marine, Integrated Combat Systems Engineer and member of the winning team. “I had heard about JCORE and seen people use it but had never actually used it myself. So this was a great introduction to some of the technologies we use at Dahlgren that I hadn’t had the chance to work with yet.”

Following the success of the third event of its kind at NSWCDD, Stuart said there are plans for more hackathons in the future – including semi-regular hackathons that use JCORE. “We’re absolutely looking forward to the next one,” she said.